Sing Low Indigo – Ticket Sales have Closed, but we still have room, so go to our website and make reservations! 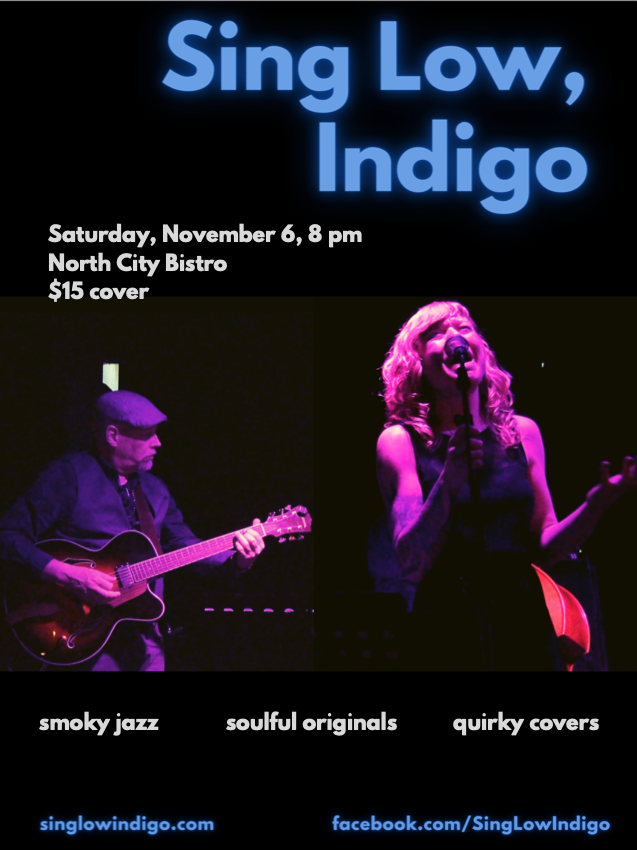 Heidi Matthews knows how to rock out—as you’ll agree if you ever caught her playing keys and singing background vocals with Seattle’s hard-rocking stalwarts, the Spinning Whips. Heidi will be the first to tell you that being on stage with the Whips is a fun and wild ride. But she has another side. A sucker for sultry jazz, Heidi got a notion to try a new gig, one where she would rock a cocktail dress instead of ripped jeans—as a smoky jazz chanteuse.
She knew she had to give it a try—so she teamed up with jazz guitarist and songwriter Glen VanDerPloeg in 2014. They quickly developed a strong musical empathy and a signature sound that is moody, spacious, and intricate. Listeners were surprised to learn they’d played together for months rather than years. Also surprising was how Glen, a Michigan native who had previously written songs only now and then, found his creativity sparked by Heidi’s deeply felt delivery of his complex, poetic lyrics. Diving deeper into his craft, he rolled out a string of new songs with various themes and styles reflecting the moods of life in the Pacific Northwest. At the same time, Heidi found her stride as a passionate jazz diva with a badass punk attitude.

Glen and Heidi soon filled out their sound with acoustic bass player Will Stump and drummer Wayne Porter. They hit Seattle clubs and coffeehouses with a name that reflects their moody, heartfelt vibe: Sing Low, Indigo. Before long, they had more than enough material for an album of mostly original, hard-to-categorize music— jazz mixed with Americana, Latin, indie-pop, and lounge. Their debut was released in 2017.

Though Heidi no longer rocks out with the Spinning Whips, she whispers, croons, and belts as lead singer with Sing Low Indigo. And you can’t go wrong with that.