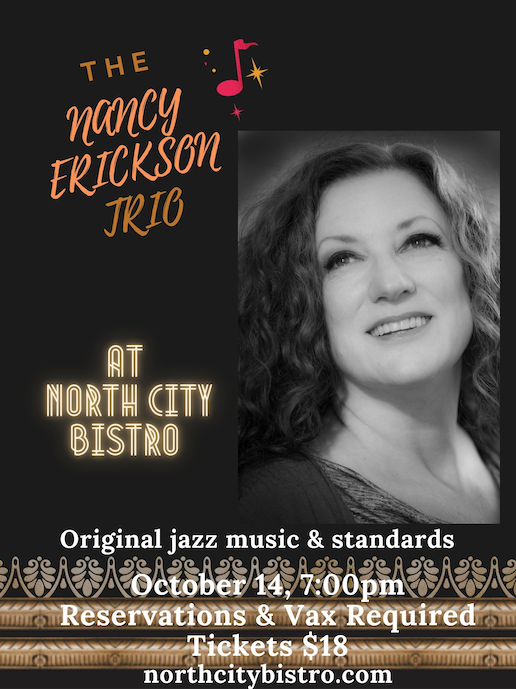 “A skilled singer who is also an excellent songwriter…Ms. Erickson has an appealing tone, does justice to lyrics and swings.” – Scott Yanow, Los Angeles Jazz Scene

“Nancy Erickson belongs on the same page as many of the best in jazz vocals.” – Les Reynolds, Indie-Music.com

With influences like Nancy Wilson, Frank Sinatra, Dianne Reeves, and Peggy Lee, Nancy Erickson’s rich, mellow alto voice has been compared to Karen Carpenter and Diana Krall. Ms. Erickson began her career in the late 80’s singing in a NW jazz band called After Hours. She has since released 4 albums, the first of which was a Christmas CD entitled “Urban Christmas” in 1993 under the group name, ‘Xebec’, followed by her solo debut album (after a break raising children) in 2011 “Prelude”, then “While Strolling Through the Park” in 2016.

Her most recent album “Here & Now” was recorded live by KNKX jazz radio host Jim Wilke. In 2012, Nancy won the Seattle Kobe Female Jazz Vocalist Competition. This resulted in performances in Kobe, Japan, including Asahi Hall which was also broadcast live online to over 5,000 viewers. Nancy’s passion for jazz music is demonstrated in her pin-drop ballads and the rapport she has with her band and the audience.