Nancy Erickson Lamont – We Still Have Room, but ticket sales closed this AM, so call 206 365-4447 for reservations 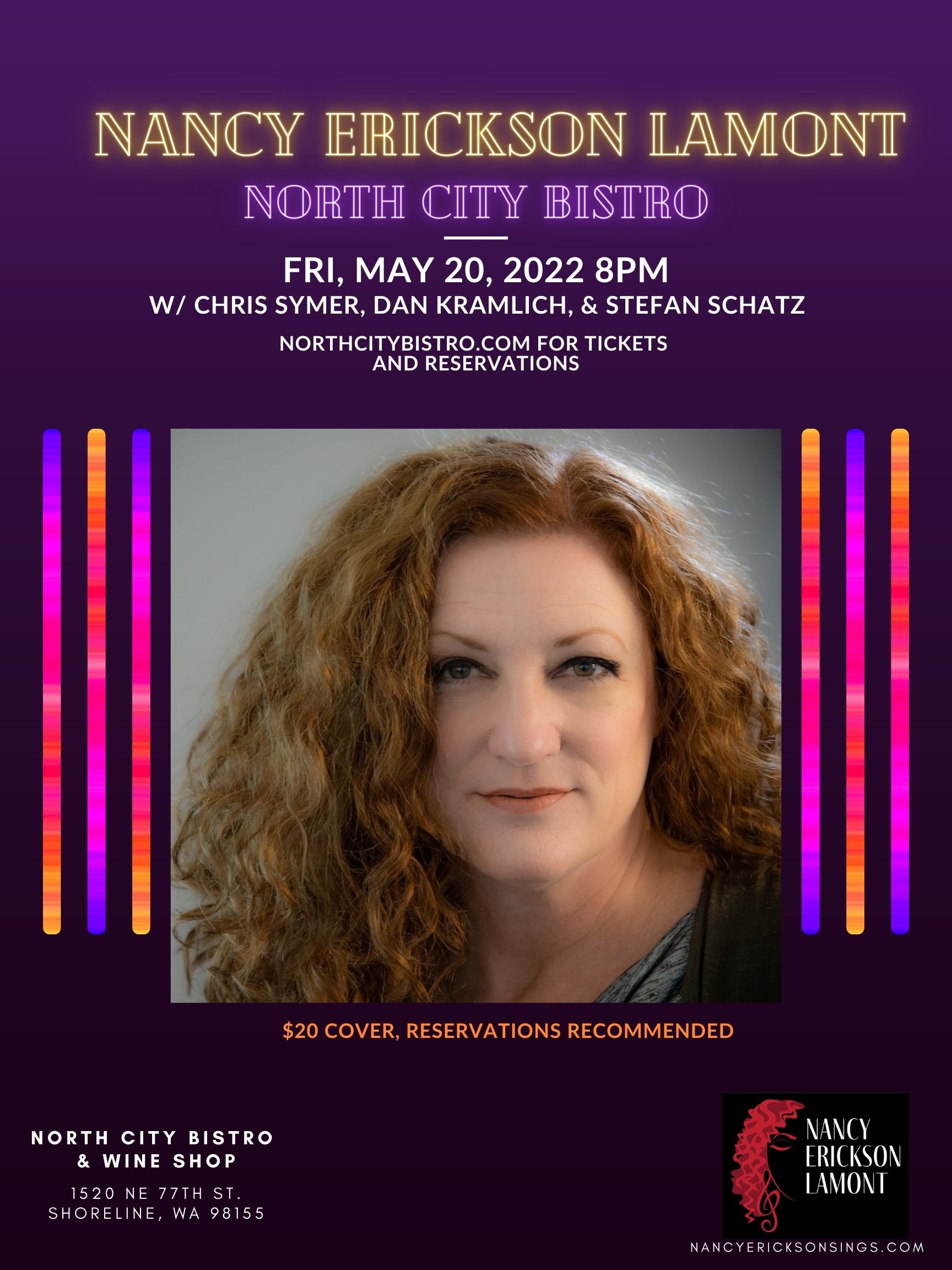 “A skilled singer who is also an excellent songwriter…Ms. Erickson has an appealing tone, does justice to lyrics and swings.” – Scott Yanow, Los Angeles Jazz Scene
Award winning jazz vocalist and songwriter Nancy Erickson has been bringing her rich, melodic vocals to the Pacific Northwest Jazz scene for over 3 decades. Hailed as “one of our best contemporary singers – full of feeling, wit… and a thoroughly winning originality” (Michael Steinman – Jazz Lives), Nancy has released 3 solo albums on her Vital Flame Productions label. She has performed both internationally and throughout the Northwest. With influences like Nancy Wilson, Frank Sinatra, Dianne Reeves, and Peggy Lee, Nancy Erickson’s rich, mellow alto voice has been compared to Karen Carpenter yet her vocal range and smooth transitions from mezzo soprano to contralto have become her trademark. Nancy’s passion for jazz music is demonstrated in her pin-drop ballads and the rapport she has with her band and the audience. Nancy teaches in the Snohomish school district and is a board member of Seattle Women in Jazz.

Pianist Dan Kramlich can be heard on many recordings by local musicians, including Steve Treseler’s “Center Song”, Bernie Jacobs’ “One by One” and Phil Parisot’s “Lingo” and “Creekside”. He currently performs with his own group, The Dan Kramlich Grunge Trio as well as the Javatown Swing Orchestra. Dan directs the jazz ensemble at Seattle Pacific University, teaches class piano at Bellevue College, and maintains a busy private teaching studio in Seattle.

Born and raised in Southern California, bassist Chris Symer relocated to the Northwest in 2002. Chris has stayed busy doing everything from teaching to playing on feature films. Notable projects have included recordings with Bill Anschell (“Rumbler” 2017), Johnaye Kendrick (“Here” 2014), James Knapp (“Scrape” 2013), and Nelda Swiggett (“Stringtet” 2014) as well as tours to South America with Anschell (2012, 2014) and Kendrick (2013). Studies in jazz and classical double bass performance combined with a love for bass guitar have provided Chris with an appreciation of many styles of music and an ability to fit into almost any musical situation.

Stefan Schatz was born in New York City. After training early on as a classical percussionist, Stefan went on to study jazz drumming at the New School in New York City. He has been fortunate to work with many fine artists, including vocalists Dakota Staton, Jon Hendricks, and Peggy Cone. Stefan has played at most of the great jazz clubs in New York City, including the Village Vanguard, Dizzy’s Club Coca-Cola, the Blue Note, Birdland, Iridium, and Smalls. He has toured worldwide with various groups to high acclaim and has appeared on “The Today Show,” “Good Day NY,” “60 Minutes,” “Food Nation,” “The Isaac Mizrahi Show,” and “Jazz Set.” He has played on film, TV, and Broadway soundtracks, commercials, and numerous albums. In April 2019, Stefan made his debut with the world-renowned Jazz at Lincoln Center Orchestra, under the direction of Wynton Marsalis.