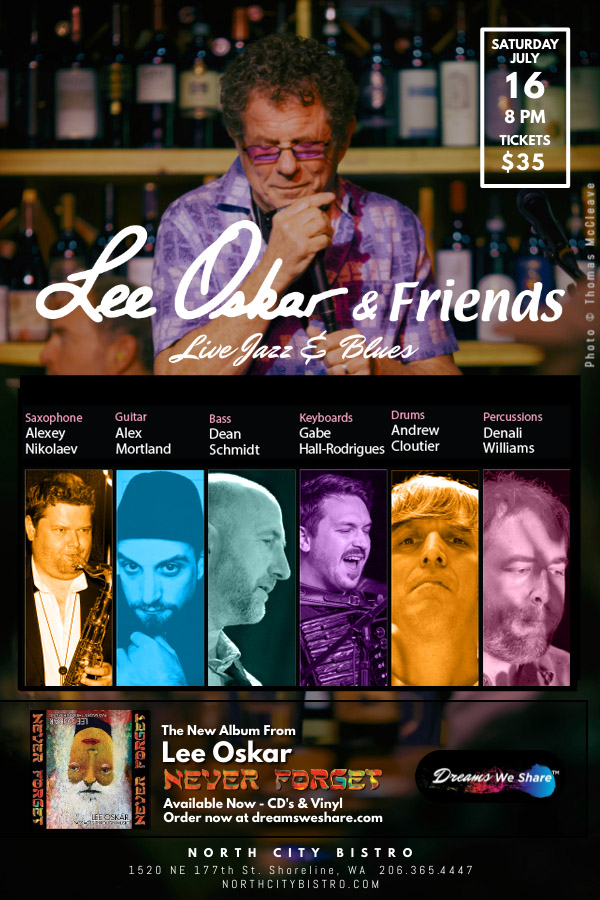 Lee Oskar is an internationally acclaimed harmonica virtuoso, composer, producer,
manufacturer and lifelong musical explorer. He is renowned for his iconic role as a
founding member, co-composer and lead harmonica player of the pioneering
funk/jazz band that composed and recorded such hits as “Low Rider,” “Spill the
Wine,” “Cisco Kid,” “The World is a Ghetto,” “Slippin’ into Darkness,” “Why
Can’t Be Friends,” and many more chart-topping songs from 1969-1993.
Since then, Oskar and his original band mates from that era perform as the
LowRider Band. Oskar also performs around the world with outstanding musicians
from the Pacific Northwest, known as Lee Oskar &amp; Friends, featuring his own new
arrangements, innovative compositions and well-loved hit songs.
Artistically, Oskar has earned critical and popular acclaim for nearly four decades
with his wide-ranging portfolio of unforgettable compositions evoking different
moods, rhythms, and genres. In the words of Seattle Times critic Misha Berson,
“The harmonica man can really blow, but he can croon, too.”
Lee Oskar has earned ASCAP writing awards, and had his signature sound
celebrated in Pitbull and Kesha&#39;s recent hit, “Timber,&quot; which was inspired by
Oskar&#39;s harmonica contributions in the song &quot;San Francisco Bay.&quot;
Lee Oskar established his own recording label, Dreams We Share™ in 2020. He
proudly produces professional recording artists as well as his own music. Most
recently, Oskar brought in highly accomplished instrumentalists to play exciting
new arrangements of his original compositions, that will be released soon as “Lee
Oskar &amp; Friends”.
The first collection of Lee’s original works under Dreams We Share is the newly
released master work, “Never Forget” (2022), which serves as a culmination of his
life’s work and an artistic memoir of his life. Other recording projects with Lee
Oskar &amp; Friends are in development.
Also, under his Dreams We Share™ label, Oskar recently produced and released
the much-anticipated album, “So Much Trouble,” featuring original songs written
and performed by David Rotundo, a well-received Canadian artist, and Lee Oskar
Harmonicas Featured Artist (Dreams We Share; October 2020). This album has
been highly acclaimed by critics and fans alike, performing consistently well on
numerous blues charts since its release.
In addition, Oskar has brilliantly produced the work of other artists playing Oskar

compositions, including Takahiro Miyazaki from Japan, who Oskar considers to be
one of the world’s greatest saxophone players
Oskar is proud to be a featured artist on globally recognized Playing for Change&#39;s
“Songs Around the World” album and the “Listen to the Music” project, in
collaboration with musicians around the world.
Through his company, Lee Oskar Harmonicas, he has created a special limited-
edition line of harmonica products exclusively available through Playing for
Change to help support artists and musical education around the world.
www.leeoskarmusic.com
www.dreamsweshare.com
www.leeoskar.com