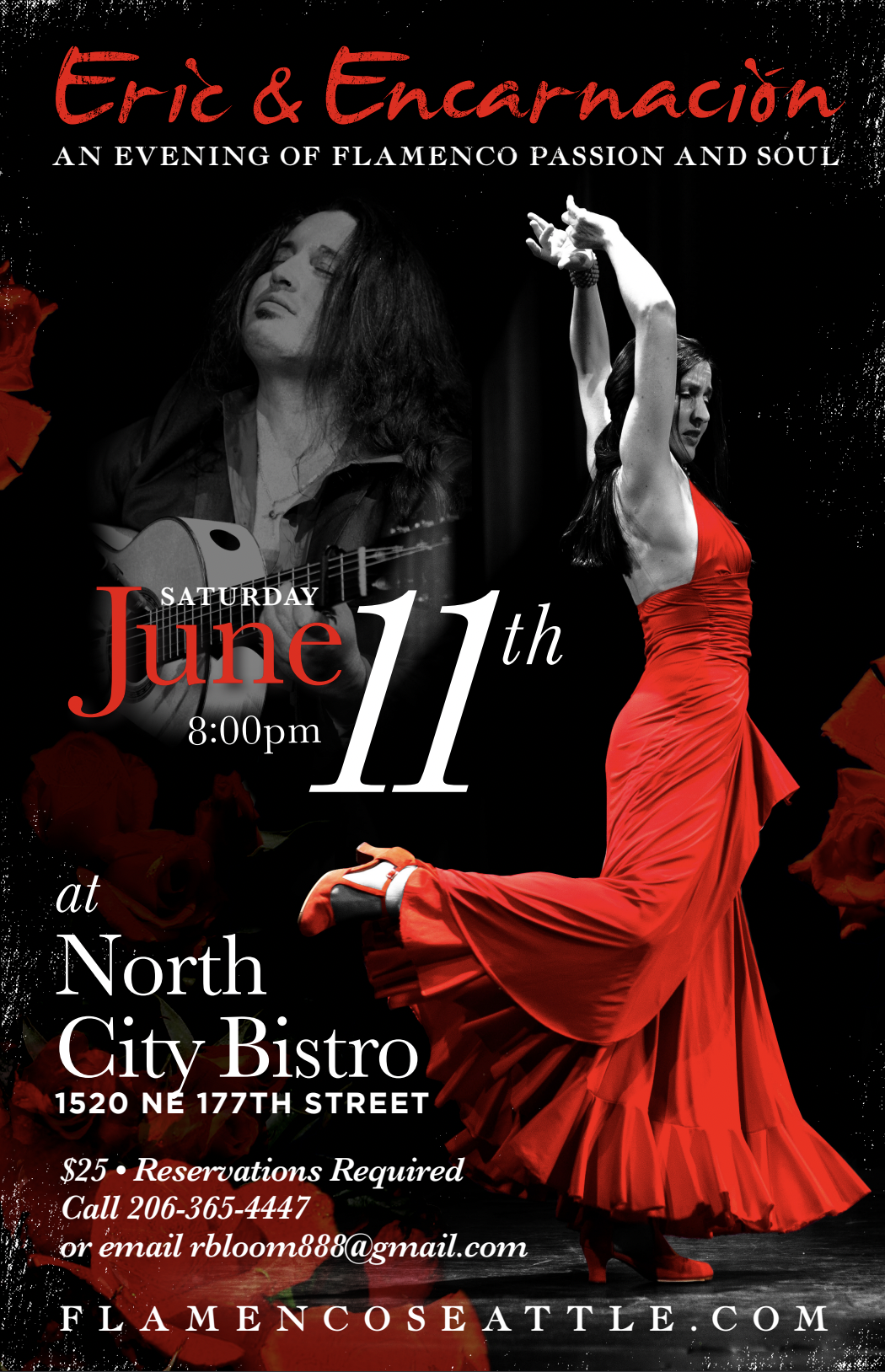 Eric & Encarna handle their own ticket sales, and here is the link: https://flamenco-seattle.square.site/

Here is the link for reservations: https://northcitybistro.com/reservations/

Eric & Encarnación are an internationally renowned flamenco duo known for the deep connection and evergy that permeates their live performances, and ability to invoke the flamenco spirit night after night. They have performed nationally and internationally for years with the world/ rock supergroup “Children of the Revolution” and their touring flamenco company “Flamenco de Raiz”, working with some of Spain’s greatest living flamenco artists. Based in Seattle, they have played sold- out theaters all over the Seattle area, including Meany Hall, Paramount Theater, Benaroya Hall, and The Triple Door. They appeared in major festivals and theater series, including headlining Quebec’s prestigious “World Guitar Festival”.

Encarnación was born in Barcelona to a family of exiles from the Spanish Civil war and grew up in Barcelona and Mexico City. Still, her family kept her immersed in flamenco music while in Mexico, and she later returned to her homeland to study and perform. A dancer, singer, and guitarist, she is a unique and one-of-a-kind performer who entrances audiences everywhere with her grace, depth, musicality, and intense energy.

Eric Jaeger “El Comanche” has lived and studied extensively in Andalucía, Spain and has dedicated his life to the art of flamenco guitar. On stage, Eric draws on his extensive experience as a producer and songwriter, bringing a sense of melody and composition to his performances. Eric was the lead guitarist and co-founder/producer of “Children of the Revolution,” a successful band which fused flamenco, Latin, Middle-eastern and rock melodies. Eric has produced 7 CDs to date for the band, and his work has been featured on the best-selling Putumayo Presents series (“Greece” and “Swing around the World.” Recent recordings include “Flamenco de Raiz” live CD, and studio single “Mi Aire” with one of the world’s greatest flamenco singers, Rafael de Utrera, and “Rumba al Maestro” which went #1 on Amazon’s Flamenco and Rumba download charts.

Eric & Encarnación return to Spain every year to stay immersed in the art of flamenco, and more importantly, to live and breathe the flamenco culture with their friends and family in Sevilla and Barcelona. FLAMENCOSEATTLE.COM