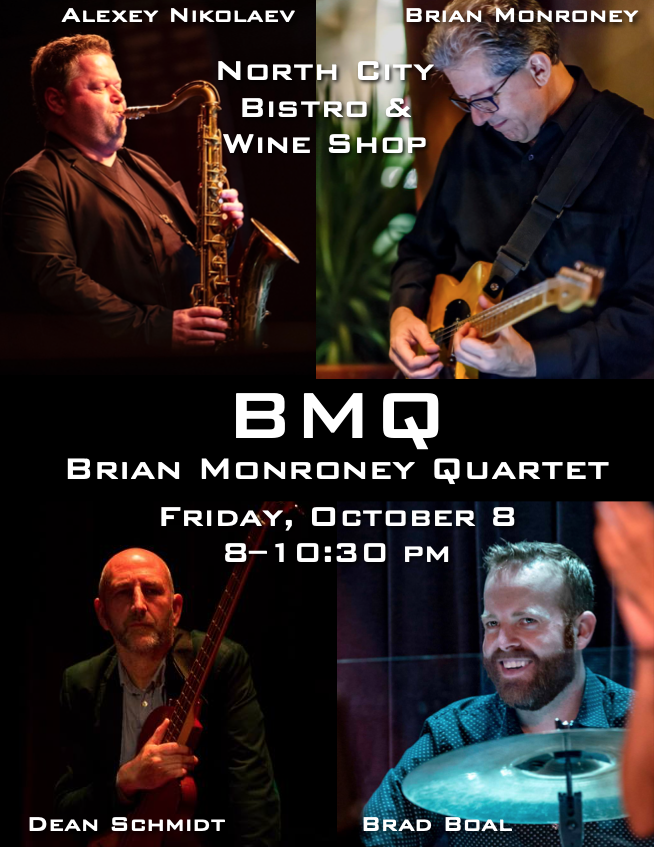 Reservations can be requested through our website. Just click on the Big Red Reservations button, and fill in the blanks. Also, Please Bring Proof of Vaccination in order to be seated inside! You can also purchase ticket on our website, and if more than one person in your party buys tickets, please send us the names of everyone in your party, so we know who we need to seat with you.
Brian Monroney Quartet (BMQ) –
After over three decades as busy sideman and session musician, guitarist Brian Monroney leads his first band as featured artist and composer. Brian has toured, performed and recorded with likes of Tom Jones, Gloria Estefan, Natalie Cole, Barry Manilow, Nelson Rangell, Ilan Chester and many others. As a guitarist, Brian is influenced by a broad spectrum of music and musicians and takes delight in combining it all freely with an emphasis on melody and groove.
The quartet includes powerhouse saxophonist Alexey Nikolaev and the illustrious rhythm section of Dean Schmidt (bass) and Brad Boal (drums). In addition to Monroney original compositions which evoke a wide range of modern and straight ahead jazz, and classic fusion from the 70’s and 80s, the quartet plays favorites penned by artists such as Michael Brecker, Don Grolnick, Pat Metheny and John Scofield.
Alexey Nikolaev, tenor saxophonist, has earned a reputation in the Seattle music scene as a “monster sax-man.” Alexey graduated in 1993 from Gnesin’s Music Academy of Russia with a B.A. in saxophone and arrangement. In 1994, he completed his studies in Dublin, Ireland with saxophonist Dave Liebman.
He has performed globally at such prestigious events as the Montreux Jazz Festival, Black Sea Jazz Festival, Victoria Jazz Festival, Lionel Hampton Jazz Festival, Portland Jazz Festival (USA), and the San Francisco Balboa Jazz Festival (USA), among others. Since 2000, Alexey lives in Seattle and is currently a faculty member at Edmonds Community College.
Brad Boal picked up his first pair of sticks at age ten and hasn’t stopped playing since!
Brad has performed, recorded or toured with: The Count Basie Big Band, Benny Green, Bob Brookmeyer, Sam Rivers, Anne Hampton Callaway, Nancy King, Vincent Herring, and others.
Brad also keeps a busy schedule as a versatile freelance drummer based out of the greater Seattle area. Through his drumming, Brad has also gigged and traveled internationally as well as throughout the US. His superb musicianship and steadfast professionalism have made him one of the Northwest’s most in demand musicians.
Dean Schmidt is one of the most sought after bassists in the Northwest, well versed in all styles of music. He grew up in Seattle absorbing the music played around the household, mostly rock and roll, his father having been a big fan of the Beatles and the Rolling Stones. Dean studied at the prestigious Musicians Institute of Technology in Los Angeles, and after 6 years in LA was hired by legendary guitarist James Burton for a one-year stint in Hawaii. After returning to Seattle he became a fixture on the local scene.