Amaro (Italian for "bitter"), is an Italian herbal liqueur that is commonly consumed as an after-dinner digestif. It usually has a bitter-sweet flavor, sometimes syrupy, and has an alcohol content between 16% and 40%. 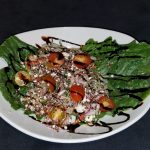 Fernet is an Italian type of amaro, a bitter, aromatic spirit. Fernet is made from a number of herbs and spices which vary according to the brand, but usually include myrrh, rhubarb, chamomile, cardamom, aloe, and especially saffron, with a base of grape distilled spirits.

Vermouth is an aromatized fortified wine, flavoured with various botanicals (roots, barks, flowers, seeds, herbs, and spices) and sometimes colored. The modern versions of the beverage were first produced in the mid- to late 18th century in Turin, Italy. While vermouth was traditionally used for medicinal purposes, it was later served as an apéritif, with fashionable cafés in Turin serving it to guests around the clock In the late 19th century it became popular with bartenders as a key ingredient for cocktails, such as the martini, the Manhattan, the Rob Roy, and the Negroni. In addition to being consumed as an apéritif or cocktail ingredient, vermouth is sometimes used as an alternative white wine in cooking.

Historically, there have been two main types of vermouth: sweet and dry. Responding to demand and competition, vermouth manufacturers have created additional styles, including extra-dry white, sweet white (blanc or bianco), red, amber (ambre or rosso), and rosé.